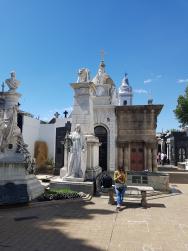 The ghosts at Recoleta Cemetery also play soccer! This is the story of Jeremías López, a “Messi” from the 20´s. He was very skilled with the ball but with very bad luck  He worked as a cook of a very rich family in Buenos Aires and one day he had an accident with boiling oil which burnt almost his whole body and also his legs. One week later he died. He was only 17 years old and he had the hope of playing in the first World Cup in Uruguay. The chief of the family buried him in his own family grave. During the night some noises with bouncing balls and someone running can be heard inside the crypt. And if anyone leaves a ball at the door of the crypt…..it disappears.

Your reviews helped us to earn a Certificate of Excellence